In August 2021, Bakehouse were proud to produce and deliver Bracknell Forest Giants – an interactive and entertaining 10-day place-making event in and around The Lexicon Shopping Centre.

With huge bespoke tree-giant installations, interactive theatre, AR enlivenment, roaming performance and music – it was a town centre takeover on a GIANT scale.

To create an exciting family-friendly experience that will drive footfall to Bracknell town centre and The Lexicon Centre during the summer holidays 2021,  with a focus on legacy and the possibility of repeating and growing the event in future years.

The event required a unique story that would generate significant PR in order to position Bracknell as the shopping centre of choice for a diverse regional audience, including a more affluent demographic from the wider Bracknell catchment area.

The event needed to be engaging and interactive, leading people in and around The Lexicon to encourage an increase in dwell time. In addition to driving footfall, it was hoped that the event would stimulate positive perception of Bracknell and increased spend and support of the town centre businesses. 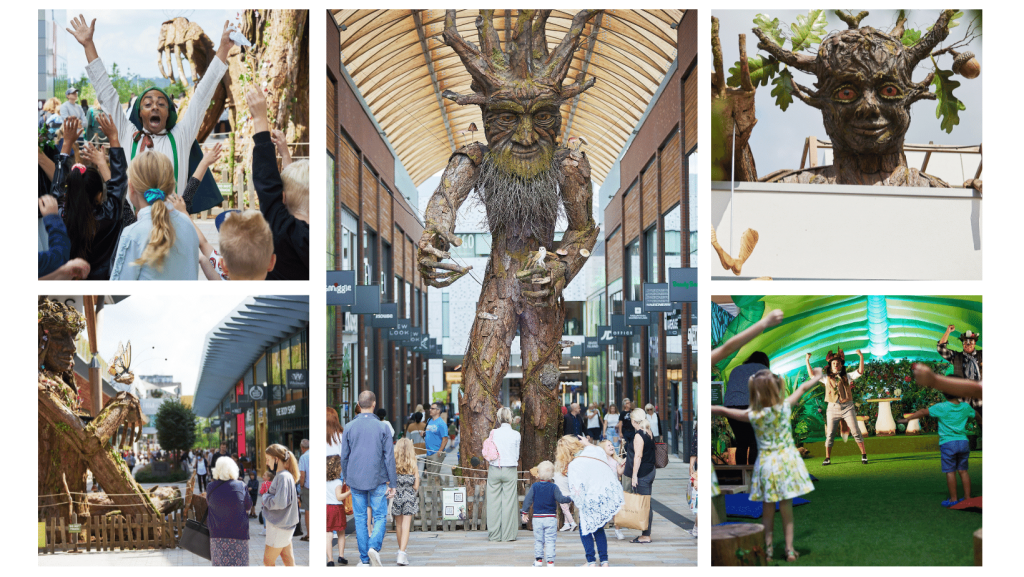 With a tight turnaround of just three months, Bakehouse created an epic ‘Forest Festival’ in the heart of the urban centre. Featuring giant installations, some more than 7m high, augmented reality, animated technology and soundscapes plus a packed programme of interactive theatrical events and music.

Bakehouse carried out extensive research on the core characteristics of Bracknell and it’s population, and chose to focus on the tree strategy and draw inspiration from the borough’s forested spaces.

The borough of Bracknell Forest is made up of 40% woodland, forest and greenspaces.

There were key themes running through Bracknell’s Tree strategy which formed the basis for the stories created and delivered by Bakehouse throughout the event: 1) Preserving ancient woodlands for the future, 2) Ecosystems and biodiversity, 3) Green spaces for play and exploration and regeneration and tree planting for the future.

The design and build team at Bakehouse created and installed three forest giants in the town centre, with the tallest standing at over seven metres high.

Each giant represented a different element of the tree strategy and the forest ecosystem.  Each giant was designed with a unique aesthetic and personality.

Each giant was positioned in a location strategically chosen in order to drive footfall around the town centre. Each giant featured animatronic sensory elements including moving butterflies and spinning seeds.  Each had their own soundscape representative of the story and folklore they were telling.

Touch-free sound-plinths had sensors that could be triggered with a wave of the hand to hear poems, songs and educational snippets.  QR codes at each giant gave visitors access to an augmented reality programme which saw thousands of people immersing themselves in the fabled world of the giants.

Visitors were able to scan QR codes to make nature come alive on their phones, seeing animated butterflies, tumbling sycamore seeds and windswept leaves in a playful digital experience.  A second interaction used an AR overlay to turn people into tree giants, generate a photo and upload onto social media.

The Forest Owl – a beautiful, mechanical owl created by Bakehouse stood at over 2.5metres high with a four metre wingspan. It was positioned in a central location to drive footfall to a traditionally quiet part of the centre and to encourage people to stand on a log and take selfies with the owl interacting by spreading his wings as though in flight.  Standing on this selfie-log activated the owl’s sound and movement which included facts about the forest.

Bakehouse created a family-friendly immersive and interactive theatrical experience within an empty shop unit.  A sold-out program of up to eight shows per day (each 30 minutes long) took place, featuring wonderfully engaging and energetic performers.   Special Educational Needs and Disabilities (SEND) performances were also offered throughout the week featuring a Sign Interpreter.

Musical duos and storytellers in beautiful bespoke costumes (all made in-house at Bakehouse), led people around the town centre, sharing woodland-themed stories and game playing.

A talented Forest Folk Band were created to perform songs composed specifically for the event.  Tails and trails led children and their families on an interactive musical tour of the Centre, visiting retailers along the way.

Comedy act Treefellas were a family of roaming trees trying to find a place to put down their roots in Bracknell.  Conversing with visitors about the best places to live.

Tails and Trails interactive performers roamed through the shopping centre and the Forest Friends Folk Band made surprise pop-up performances in different retailers.

A Giant Footprints Trail (window trail) was created using footprints designed by local people. Activity was incentivised by a main prize of a family holiday (implemented by the client).

An empty retail unit named ‘The Knowledge Nest’ showed a programme of short videos with specialists talking about the tree strategy, forest ecosystems and ways to get involved in the woodlands in Bracknell.  A Making of the Giants’ video from Bakehouse was also included.   Contributors included natural history partners such as the Bracknell Forest Parks and Countryside Rangers and The Woodland Trust. During the event there were also live falconer talks about owls and indigenous birds of prey.

Each installation from the giants to the empty units, had a form of electronic counter that recorded each visitor engagement.  This included several light sensors and pressure pads.

Performers also had hand-held clicker-counters to record the number of people engaging with roaming performance and activity.  Customer feedback surveys were carried out by costumed actors and all events staff were proactive in recording customer comments.

“As the Bracknell Forest Giants event draws to a close I wanted to thank you for the fantastic team effort that has delivered this spectacular activity. It is amazing to think that it is only four months ago that Bakehouse stepped up to conceive and create something so special and memorial for Bracknell and The Lexicon. It truly has surpassed my expectations.

I hope you agree that what we have all achieved is exceptional, not least given the circumstances in which this has happened and the scale of our ambition. The visitors, businesses and wider community have seen what we can do when we rise to the challenge and I know we have even greater aspirations for next year.

Apart from the sheer joy this has brought to so many, my greatest satisfaction is the total commitment shown by everyone to make it happen.

As the Giants go into winter slumber, we are already preparing for 2022.

It has been a real pleasure working with such true artists and professionals.” 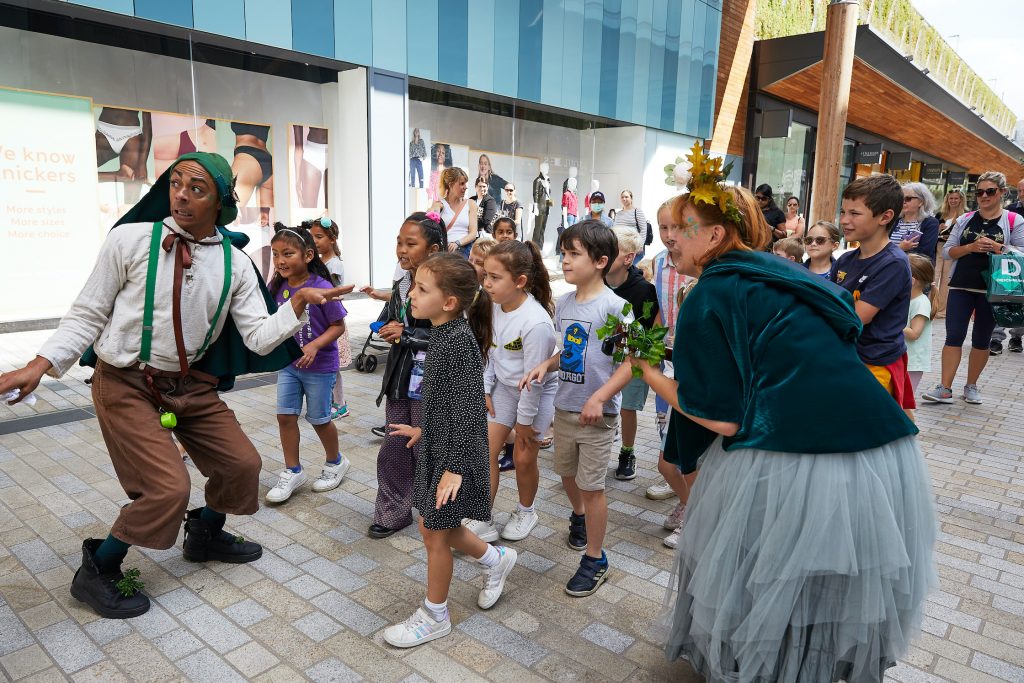 “We drove from Reading so it was a bit of a way but I’m glad we did. It’s a lovely way to give the children the message about the forest”

“We’ve had the most lovely day, everything has been amazing, we loved the band and the stilt walkers and the story teller was so good – we’re really excited to see the show!”

“The show was so beautiful – the forest friends were so brilliant, my little girl had a wonderful time, I’m so happy I feel like I’m going to cry!”

In August 2021, Bakehouse were proud to produce and deliver Bracknell Forest Giants – an interactive and entertaining 10-day place-making event in and around The Lexicon Shopping Centre. With huge bespoke tree-giant installations, interactive theatre, AR enlivenment, roaming performance and music – it was a town centre takeover on a GIANT scale. Results Footfall +23.7%